The Most Iconic (and Patented) Games

Christmas 2017 is upon us! Children worldwide will soon be comfortably tucked into their beds as they anxiously await the arrival of Santa Claus (a.k.a. Kris Kingle). This is a great time of the year to be young, or at least young at heart!

Several years ago we profiled the Top 10 Iconic (and Patented) Toys in our Christmas Eve edition. This year we decided to profile the most iconic and patented games, many of which are still likely to be found waiting for good little girls and boys under the Christmas tree. Profiled are Monopoly®, Rubik’s Cube, Battleship, and Rock’em Sock’em Robots, Twister and Simon.

We also want to take this opportunity to wish everyone a very Merry Christmas! Thank you for reading IPWatchdog.com! 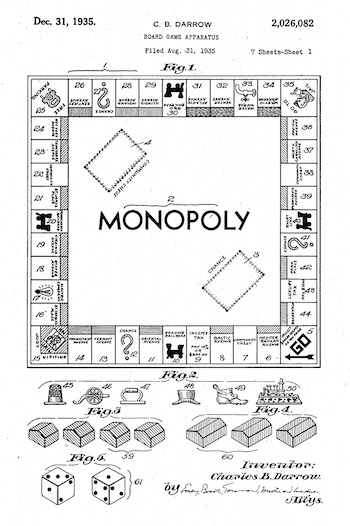 In 1935 the United States Patent and Trademark Office (USPTO) issued U.S. Patent No. 2,026,082 on Monopoly®, one of the most successful and beloved board games of all time.

As the story goes, Charles Darrow, an unemployed salesman, was struggling to support his family during the Great Depression. It was during this time that he claimed to have fondly remembered summers in Atlantic City, New Jersey, and dreamed about being a real estate mogul. These diversions purportedly lead to him formulating what has become the most popular board game of all time – Monopoly®.

Darrow felt certain he had a hit on his hands so he contacted Parker Brothers, who initially turned him down, but only after explaining that his game violated some 52 fundamental rules of a board successful game. Undeterred, Darrow marketed the game himself. As fate would have it, a friend of Sally Barton, the daughter of Park Brothers’ founder, George Parker, bought the game. At the time Mrs. Barton’s husband was the President of Parker Brothers. One thing lead to another and eventually Parker Brothers became convinced that this game, with minor modifications, could be a huge success. As a result of his invention Darrow became the first millionaire game inventor, thanks to royalty payments.

The irony, however, is that Darrow may not have invented the game at all, but rather he may have taken a locally popular game and made only a few changes. By the time Parker Brothers realized that Darrow might not have been the true inventor the game was already a huge success. To protect the game and its investment the decision was made to buy up all patents and copyrights on any related game, thereby ensuring the monopoly on Monopoly®. 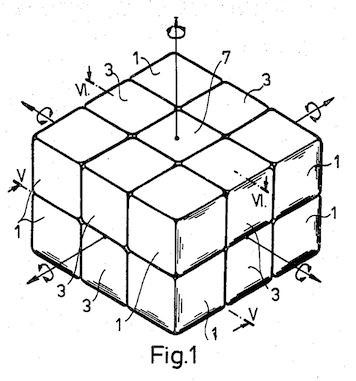 One of the most popular games of the 1980s was the Rubik’s Cube, a puzzle game that proved enormously frustrating to many who attempted to unlock its solution.

On a classic Rubik’s Cube, each of the six faces is covered by nine stickers, each of one of six colors: white, red, blue, orange, green, and yellow. See Wikipedia. A Rubik’s Cube craze captured worldwide attention in the 1980s, with tournaments and even the Guinness Book of World Records recognizing the fastest attempts to solve the puzzle.

Today the Rubik’s Cube has been a part of pop culture for decades, and has once again gained a new following with over 40,000 YouTube pages dedicated to the puzzle game. 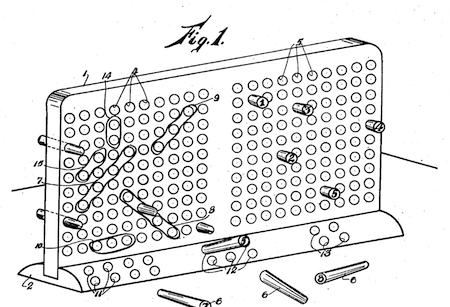 Another long time favorite game is Battleship. U.S. Patent No. 1,988,301 was issued on January 15, 1935 under the title Game board, the originally patented game does not bear a lot of resemblance to the one that many of us grew up playing.

“The game herein illustrated as in progress might be called Battleships,” the patent reads. The game is described as requiring two players to sit facing each other. “One player, making use preferably of some erasable marking means, such as chalk, places an enclosure or line around a number of arbitrarily chosen series of perforations in groups of 4 (representing a battleship), in groups of 3 (a cruiser). The patent explains that play will go back and forth with each player calling out shots at the unseen target created by the other player. “Play continues thus and when one of the series of perforations within an enclosure has been filled with pins, that ‘ship’ is ‘sunk’.” 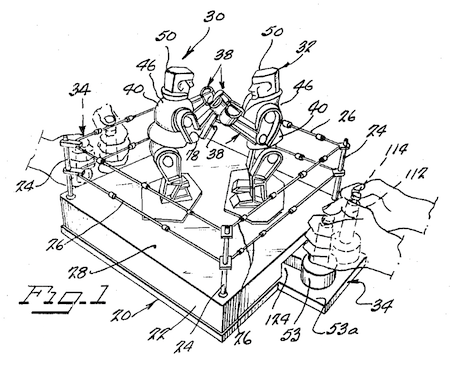 U.S. Patent No. 3,235,259, titled Toy boxers, was issued on February 15, 1966. The patent explains: “It is the primary object of this invention to provide a new and amusing toy in the form of a novel boxing game manually operated by opposing players.” Inventors Marvin Glass, Harry Disko and Burton Meyer, assigned the patent to Marvin Glass & Associates, and the first version of the Rock’em Sock’em Robots game was manufactured by Louis Marx and Company in 1964.

Rock’em Sock’em Robots was a game of battling robots, with each player trying to knock the others head off the block. The Red Rocker and the Blue Bomber would battle it out inside the ring.

Designed for two players, this boxing game required each player to a robot by operating the mechanism with his or her thumbs. 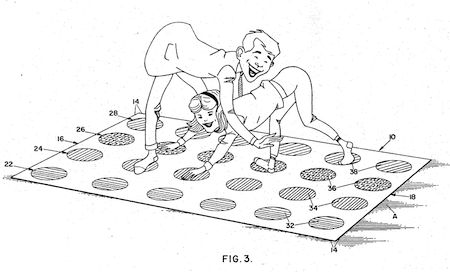 Twister has to make this list just because of the patent art on display in Fig. 3 (to the left) alone.

Invented by Charles Foley and Neil Rabens, and assigned to Milton Bradley Company, U.S. Patent No. 3,454,279, titled Apparatus for playing a game wherein the players constitute the game pieces, was patented on July 8, 1969. The patent explains: “The invention relates to a method of and equipment for playing a game of skill and chance for amusement and exercise purposes.”

The game is played with a playing surface the size of a large blanket, which has “a plurality of columns of loci, said loci being of such size and so spaces as to enable the players to place a hand or a foot on any designated locus, the columns of loci being different colors…” Don’t you just love the way patent attorneys write?

A “chance device” such as a spinner is included with the game. Someone not playing (i.e., a referee) will spin the wheel and call out a hand or foot with a corresponding color, which requires the players to twist and contort themselves in order to place the appropriate hand or foot on the color. The object of the game is to move into the appropriate position without falling. If a player falls or touches an elbow or knee to the surface the game is over and the other player declared the winner. 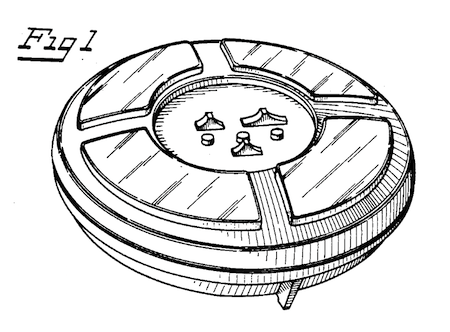 Ralph Baer, Hall of Fame inventor of the video console, was also the co-inventor of this extraordinarily popular, frustrating, and fun game. Baer, along with co-inventor Howard Morrison, invented this electronic game in the late 1970s, and launched in 1978.

U.S. Design Patent No. D253,786 was issued on Christmas Day 1979 (Fig. 1 of the patent shown left). While that might seem odd to many, the United States Patent and Trademark Office issues patents every Tuesday, and December 25, 1979 happened to be a Tuesday. Obviously, all the work to allow the patent to be done was complete well in advance. In the U.S. a patent is not officially issued until it is published, which occurred on Christmas Day 1979.

For those not familiar with this iconic game, the device is made up of four colored buttons, which light in a series. The player must repeat the sequence correctly once the lights stop. Each time the player successfully completes the correct sequence the sequence becomes longer, and as the player continues the sequence gets faster and faster. This game can still be purchased today, but the new age Simon Optix seems more virtual reality headset than anything else. In an attempt to keep the game fresh for the next generation you wear the headset and wave your hand in front of the proper color in sequence. Other varieties of this classic game include the Simon Swipe and Simon Air.

Search in the site

Calgary-made bike giving freedom back to outdoor enthusiasts with disabilities

USPTO releases updated study on participation of women in the U.S. innovation economy

InventingDaily is the best place for inventors to gain momentum for their product.
Keep Inventing Daily